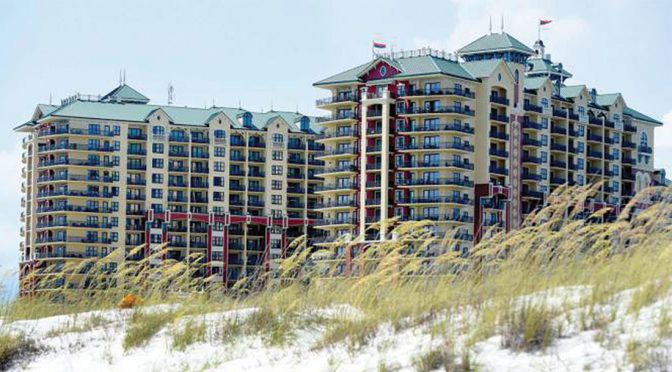 Florida’s Emerald Coast is known for its beautiful white beaches and turquoise green water. Repainting the exterior of the Emerald Grande resort was a challenging but rewarding job for Restore Construction Group, Inc., a commercial contractor based in West Park, Florida.

“Everything took longer due to the weather,” he says.

Access was the second most challenging part of the job. Many areas, including the towers, had no permanent rigging and could not be reached from a boom, so Restore had to rent a crane. That additional overhead cost added up with the weather delays.

The final obstacle to overcome was sheer logistics.

“We are in Broward County, 10 hours away from the job site,” Arnaiz says. “Fortunately, Sherwin-Williams had a store nearby to service us. That was a huge benefit. Our regular sales rep coordinated everything with the local store. Already having that strong relationship in place saved us a lot of time and hassle.”

Since the building was fully occupied during most of the repaint, Restore also had to be flexible when it came to scheduling. Crews worked seven days a week when the weather was cooperative. In the end, 16 crew members on average were needed at the site over a six-month period to complete the project.

Following a regimen of pressure washing, scraping and patching, a prime coat of Loxon® Conditioner was applied to get the stucco surface ready for the topcoat.

“I’ve been painting with Sherwin-Williams products since I was 16 years old, and I’ve been using Loxon Conditioner ever since it was introduced,” Arnaiz says. “We’ve always had a good track record with it.”

The original topcoat spec called for a high-end silicone coating, but after consulting with their trusted reps at Sherwin-Williams, Restore advised using Emerald® Exterior Acrylic Latex Paint instead.

“We felt that using the silicone coating would limit their coatings options in the future,” Arnaiz says. “In addition, the coating originally specified was not locally available. It would take two to three weeks just to get that product to the job site.”

Location, location and a long-lasting finish

With numerous Sherwin-Williams store locations in the Florida Panhandle, same-day paint deliveries are standard. That ease of obtaining product was crucial to the project, Arnaiz says, and will also be helpful for any touch-ups needed later.

SuperPaint® is Restore’s mainstay exterior paint, and they have also used quite a bit of Resilience® and Duration® Exterior Coating when budgets have allowed. But this was their first time using Emerald.

“The silicone product originally specified came with a 10-year warranty, so any paint we recommended had to have comparable quality,” Arnaiz says. With its exceptional durability and hide, and extreme resistance to blistering, peeling, chalking, fading and dirt pickup, Emerald fit the bill. It’s also backed by a limited lifetime warranty. And the paint more than lived up to its billing as best-of-class overall performance on the job site.

“It’s a great product,” Arnaiz says. “Our guys were really impressed with Emerald.”

This article was written by Mike Starling and originally published in the Winter 2015 issue of PPC magazine. Visit the Sherwin-Williams contractor website or swlatino.com for more information on products, application techniques, pro discounts and building your painting business.